Come back to reality

“I won’t commit suicide. I’m not crazy. I’m going to eliminate one of you” said a desperate middle-aged man to Greek Health Minister, Adonis Georgiades during the latter’s visit to the Thessaloniki International Fair.

The Minister is giving him an advise. “Calm down. Come back to reality. Problems do not get solved in one day”. And Rome wasn’t built in one but that’s irrelevant. The man had used his life savings to buy Greek bonds which have recently been severely cut because of the Greek “haircut”. Thousands like him are desperate, having trusted their life savings to a betraying State that is now calming them down and calls them back to reality. Blend despair with injustice and you have anger.

Some other thousands have been less angry, they have only been desperate. Extremely desperate. Fresh reports quantitatively show a dramatic rise in suicides. The Greek Statistical Authority announced that suicides have gone up in 2011 – 26,5% compared to 2010 and 43% compared to 2007, the year before the Greek crisis broke out. At the same time, NGO Klimaka, that deals with suicides and runs a 24-hour hotline, added that the actual number of suicides is much higher than this.

According to an EU-wide study researching data for the period 1970-2007, every 1% of rise in unemployment results in a 0,79% rise in suicides. The projection is geometric. If unemployment rises by 3%, suicides rise as a result by 4,45%.

Unemployment in Greece was below 10% before the crisis. It is now about to reach 30% without any visible prospect of recovery on the ground. Now do the math.

One more note left behind

A man shot himself yesterday in the very center of Athens. He is the latest in hundreds of suicides during and because of the crisis. Dimitris Christoulas  chose the place (Syntagma Square) and the time (rush hour) to pass his message. Many have called Christoulas “the Greek Bouazizi“. Christoulas’ message was handwritten on the note below.

The handwritten note that was found on Dimitris Christoulas

Here’s a translation of it:

The collaborationist Tsolakoglou government has annihilated my ability  for my survival, which was based on a very dignified pension that I alone (without any state sponsoring) paid for 35 years.

Since my advanced age does not allow me a way of a dynamic reaction (although if a fellow Greek was to grab a Kalashnikov, I would be the second after him), I see no other solution than this dignified end to my life, so I don’t find myself fishing through garbage cans for my sustenance.

I believe that young people with no future, will one day take up arms and hang the traitors of this country at Syntagma square, just like the Italians did to Mussolini in 1945 (Piazza Loreto in Milan).

Note: Georgios Tsolakoglou was a Greek military officer who became the first Prime Minister of the Greek collaborationist government during the Axis Occupation in 1941-1942.

Tomorrow’s supplement in To Vima newspaper is self-explanatory. 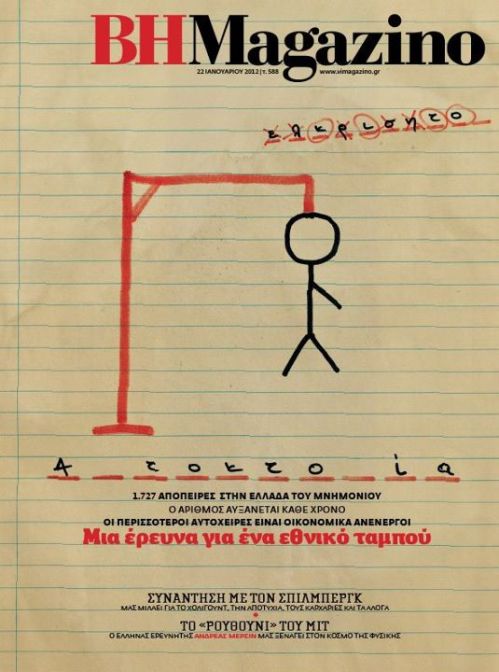 S U I _ I D E
1.727 attempts during the Memorandum years.
The number increases every year.
Most suicidal persons are economically inactive.
An investigation about a national taboo.

Last Monday, a young man from the north-western Greek city of Ptolemaida committed suicide. He was 37 years old and was facing serious economic problems. He constructed a makeshift gallows at home and hung himself. Seconds before he sent an SMS to the wife of his brother who arrived at his apartment and saw him dead. A note was found next to him where he explained that he took that decision because he couldn’t take it any more being chased by the banks for his debts.

Two days earlier, on Saturday night another man in the nearby town of Proastio Eordeas committed suicide for similar reasons. He was 58 years old and was found hanged inside his home’s garage by his daughter.

The Police hasn’t found any clues that would connect the deaths to an assassination or accident.

They are the two last additions to a long list of suicides which have taken place in Greece due to the economic crisis. Even though we are discussing the consequences of a capitalist phenomenon, I will paraphrase Stalin’s famous quote and say “When two men die it is a tragedy, when thousands die it’s statistics”.

According to Kostas Lolis, Director of Sismanoglion Hospital’s Psychiatric Clinic, in 2009 there has been about 1 suicide per day in Greece. In 2010 this number was doubled. This is generally attributed to the economic crisis as media reports often mention suicides of either businessmen who went bankrupt or people who were unemployed for a long period of time. The island of Crete has a special mention in this (although there is no explanation as to why the number is higher there). Additionally, the number of people who called the “1018” emergency number to seek advise on the issue, has also been doubled in 2010. The study of Mr. Lolis can be found here (in Greek.