On the Greece Debt Free campaign and other charitable initiatives

I was reading about a new Greek beer that is produced on the island of Santorini, famous for its volcano and magic scenery. The beer is, not surprisingly, called Volkan and is brewed with rare Cycladic ingredients. Its brewing method includes the conditioning of the water using Santorini basalt in a so-called “Lava Rock Filter”. 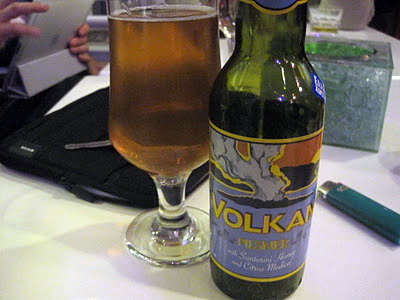 I visited their website and noticed that the brand is part of a campaign called “Greece Debt Free” (GDF). It means that for every euro spent on their products, 50 cents will be donated to reduce the Greek national debt. So far the only member of the GDF campaign is Volkan beer. Here’s their Facebook page and below you can watch their promo video.

The whole campaign is aiming either to the patriotic feeling of Greek consumers (help your country while sipping your beloved beer) or to the charitable feeling of tourists (while you’re having your holidays in Greece, help this poor country). My excitement about a new creative Greek product, at a time when Greece is obviously producing less and less, has been compromised by the whole idea behind campaign like GDF. What’s the point? Are we supposed to get drunk in order to help Greece get out of the mess? What is the GDF-supported company’s role in this chaos? And what if we manage to save Greece with the GDF campaign, as their vision suggests? The wrongdoings of those in power who mismanaged Greece for all these years will be forgotten. They, not just Greece, will be saved. No justice will be done. And, of course, it will be repeated. Simply see the criticism on charities to understand what I mean.

My objection to such initiatives is that there is no reference to responsibilities. Who brought us here? According to the mainstream narrative, we face the crisis as a natural catastrophe. Well it’s not. There have been people in power (and behind it) who took decisions and hold a part of the responsibility. And if Greece’s financial problem will be solved by offerings and donations, nothing will change.

On another similar occasion I remember, last Spring, when I passed by the Greek Embassy in Belgrade, Serbia. There was a notice board where people were invited to donate money in order to reduce the Greek public debt. Like a charity’s box over the counter of a grocery store. “This is where we’ve ended” we said with my friends. Where has this country’s dignity gone? 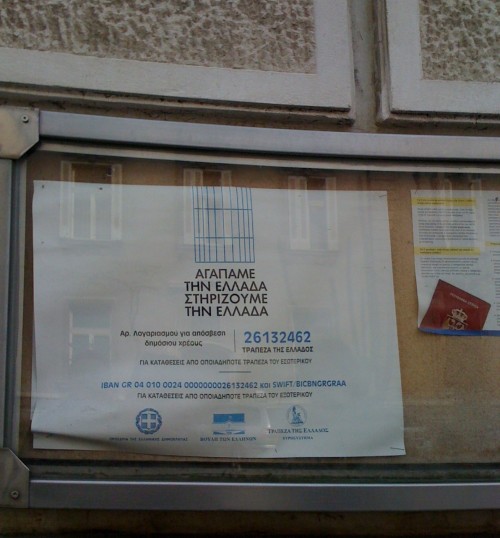 "We love Greece - We support Greece" says the poster outside the Greek embassy in Belgrade, Serbia.

Apparently, there was no funds for a special printing of the poster in Serbian, so the poster is fully in Greek. I guess these posters were printed by the Ministry of Foreign Affairs and were distributed in Greek embassies worldwide. I wonder how much money this campaign managed to raise.