This morning, I woke up and read the story of the Greek Public Power Corporation’s (DEI) trade union, GENOP-DEI and their occupation of a company’s building. It wasn’t just a random building of course but the data-processing center from which disconnection orders are issued. You see, a couple of months ago the Greek government has announced the levying of a new property tax (in relation to the square meters of the property) which would be incorporated in our electricity bills. Why the electricity bills? So that people HAD to pay the tax in order to avoid a very short-term and vital consequence, having their electricity supply cut off. 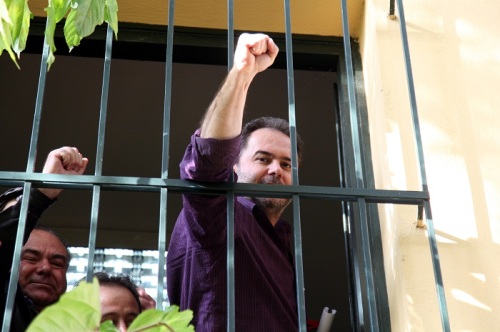 Nikos Fotopoulos greeted his comrades from the prosecutor's office window

The GENOP-DEI union’s leader, Nikos Fotopoulos, posed as a hero immediately after the announcement. He said that DEI’s workers would never allow such a thing to be carried out with the help of their hands. Some people wondered back then: Who actually governs this country? Can a trade unionist block an elected government’s policy? Well, today the government has tried to perform its own tour de force. Nikos Fotopoulos and 9 other GENOP-DEI union officials were detained after up to 80 riot policemen were sent in to end the four-day sit-in at the Public Power Corporation (DEI) data processing centre. Fotopoulos himself appeared before a prosecutor on charges of  obstructing the functioning of a public utility. The riot policemen arrested 5 more people in the event (3 employees in Ministries, a pensioner and an unemployed man). “We’ll always fail the exam of the course on Submission” shouted Fotopoulos from the prosecutor’s office window as another Andrzej Wajda’s Man of Iron.

To avoid any misunderstanding, I don’t believe that the new property tax is fair. Especially when exceptions have not been designed (unemployed people for example also have to pay this). The implementation of the law caused laughter in some cases, anger in some other. There was a big debate in September on whether churches should pay the tax, based on the square meters of the temples. And there was an uproar a couple of days ago when some earthquake victims (of a 1995 quake, who were promised to get preferential loans in order to rebuild their homes) were sent their electricity bill which included the new property tax, based on the square meters of the container-houses in which they are living since the 1995 earthquake. However I believe that what GENOP-DEI is doing with these shows of rebelliousness is just an act in order to gain public sympathy in their struggle to protect their guild’s benefits. See this post for another show by GENOP-DEI.

This trade union is not alone though. It is not uncommon during the past months to see trade unions which in the past were synonymous to either the interwoven political and business interests (e.g. journalists) or the state protectionism of special groups of public employees. Of course this is not to say that all trade unions function like that in Greece (but a lot of my friends would say that the majority of them do).

One example for what I wrote above is this. Given the opportunity of a 25-day long strike at Hellenic Halyvourgia (Steelworks) which has gone largely unreported by the Greek mainstream media (thanks to business relations, advertisement, you name it) the Union of Journalists of Athens’ Newspapers (ESIEA) has sent a newsletters showing their support to the workers at the steelworks. While I was writing this, I found another example. The Union of Employees at the Public Broadcasting Corporation (POSPERT) have stated their support to GENOP-DEI and demanded (?) the release of the arrested trade unionists. Here are the relevant newsletters (from ESIEA and from POSPERT), unfortunately only in Greek.

It’s fantastic! Greek trade unions seem to have remembered that they represent the working class of this country. Too bad they are a bit too late.

PS. A very common slogan during the demonstrations in Athens which aims to show the hidden agenda of trade unionists (who usually end up in the Parliament with one political party or another) is this: Αλήτες, λέρες, εργατοπατέρες. I’d be grateful if a Greek reader could translate it. :-)

3 responses to “Men of Iron”